Bangalore, Tue June 30,2015
Think Wimbledon! What springs to mind ? A tournament renowned for its quirks; not the least being the fact that the organisers don't rely on the ATP rankings entirely. Instead, players' rankings depend on previous grass-court results too. The all-white dress code; the formal announcement of names; no on-court advertisements; and, of course, strawberries and cream..

When we see the probability of winning the title among Top 4 rankings (normally the expected choice for the title is among top 4 only and the top 10 is analyzed for the probables up to the semi final) viz., Novak Djokovic (1), Roger Federer (2), Andy Murray (3) and Stan Wawrinka(4)
Defending champion Novak Djokovic avoided his three biggest traditional rivals in the Wimbledon draw on Friday as the other members of tennis' "Big Four" were all placed on opposite sides.

Roger Federer, Andy Murray and Rafael Nadal were all placed in a tougher bottom half of the draw that also includes former finalist Tomas Berdych and former semifinalist Jo-Wilfried Tsonga. That left Djokovic facing a possible semifinal against Stan Wawrinka, the man who beat him in the French Open final.

Who will win the Wimbledon 2015 men's singles title ???
So, the semi finals of Wimbledon 2015 will be more interesting for the Tennis fans worldwide. It is most expected that the arch rivals Novak Djokovic (1), Roger Federer (2), will meet in the final.World number two and seven-time Wimbledon champion Federer, who won the last of his 17 majors at the All England Club in 2012, is seeded to meet Djokovic in the July 12 final. Federer was edged out in five sets by Novak Djokovic in last year's Wimbledon final. Two-time champion Nadal, seeded only No. 10 this year, could face 2013-winner Murray in the quarterfinals, with seven-time champion Federer possibly awaiting the winner in the semifinals.


The world number one had stayed resolutely out of the spotlight since his Roland Garros upset by Stan Wawrinka ended his latest bid to complete the career Grand Slam. Novak Djokovic insists his heartbreaking French Open final defeat has been consigned to history as he begins his Wimbledon title defence on Monday-29/06/2015. Djokovic's loss to Wawrinka in Paris was just his third defeat in 44 matches this year. But such Paris disappointments have previously worked in his favour. His 2011 semi-final loss to Roger Federer at Roland Garros ended a 41-match win streak that year.
Roger Federer Eyes Wimbledon History, feels his game is better than last year. He is chasing his eigth title and still competes with Pete Sampras. Roger Federer says he is in the perfect condition to win Wimbledon for a record eighth time as the Swiss great bids to avenge last year's "heart-breaking" final defeat. Roger Federer still the king of SW19 Swiss master is at the top of his game as he chases record eighth title at Wimbledon But Federer is adamant he has moved on from that painful day and he returns to his favourite Grand Slam determined to finally surpass Pete Sampras and William Renshaw as Wimbledon's most successful male singles champ

He claimed an eighth title at the Halle grass-court event in Germany last week, and would dearly love to pull one clear of the Wimbledon record he shares with Pete Sampras by matching that haul at Wimbledon. He will be 34 in August -- the oldest man to win Wimbledon in the modern era was Arthur Ashe who was 31 years and 11 months when he triumphed at the All England Club in 1975.Roger Federer will not reveal retirement plans until last moment as seven-time Wimbledon champion aims for more glory .

Andy Murray and Wawrinka:
Andy Murray, the 2013 champion, saw his 2014 campaign sabotaged by a combination of back pain and an inspired Grigor Dimitrov in the quarter-finals. But the 28-year-old world number three, fresh from a record-equalling fourth Queen's Club title, believes he's playing better than when he secured his historic Wimbledon triumph.

Despite Wawrinka's second major title at the French Open, Wawrinka has never got beyond the quarter-finals, while fifth-ranked Kei Nishikori can only boast a fourth-round best. But the form Wawrinka has now,and the fighting evenat the braek pointsseen inthe french open 2015 few days ago, assures a seat in he semis tomeet the Fedrer. Two-time champion Rafael Nadal is seeded 10 -- his lowest position for a decade.

Who is the Champion at SW19, This year?
My choice: It is Roger Fedrer who is going to make history. 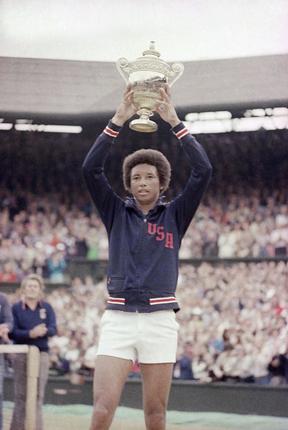 1975: Colour is in short supply at Wimbledon. It is a must for players to turn out in all-white attires. For officials and ball boys, it was always green and purple until navy blue and cream uniforms were chosen in the mid-2000s. But the biggest colour statement ever made here still belongs to Arthur Ashe. When he beat Jimmy Connors in the 1975 singles final, he became the first African-American to triumph. He spent much of his career and the years after it trying to dismantle the barriers of poverty, racism and social stereotyping. Unsurprisingly the ATP’s Humanitarian of the Year award                                       is named after him.

1980: Think of Bjorn Borg and John McEnroe, the mind always travels back to the 1980 final and to that unforgettable fourth-set tie-breaker. McEnroe saved five match points, won the 22-minute affair 18-16 and stretched the match to five sets before losing to hand Borg his fifth Wimbledon title. But more than that it signalled the making of McEnroe as a champion and sowed the first seeds of doubt in “Ice-Cool” Borg’s mind. The match, in its entirety, is still arguably the greatest match ever played..

1985: Aged 17, Andre Agassi, Pete Sampras and Roger Federer all lost in the first round at Wimbledon. But another 17-year-old won the men’s singles crown in 1985: Boris Becker. The public had little knowledge about who he was. The players knew him as ‘Boom Boom’, the overgrown kid in tight shorts. But, when he beat Kevin Curren in the final, he became the youngest-ever and the first unseeded male to clinch the title. “It was such an extraordinary record that people looked at me like I was from Planet Mars,” Becker told The New York Times in 2010. “They said I couldn’t have been                                       human to do that. I get these looks, still, now.”

1988: From 1982 to 1987, Martina Navratilova owned Wimbledon, so much so, that a reporter from The New York Times described her “as much of a fixture on Centre Court as the Duke and Duchess of Kent (the ones who hand over the trophies). In 1988, though, she ran into a 19-year old West German in Steffi Graf and lost. For Graf, it was the second stop in her journey towards the ‘Golden Slam’ (winning all four Slams and the Olympic Gold medal in the same year) and for tennis a passing of the torch moment.

2001: For a full decade, Goran Ivanisevic was everybody’s second favourite. He was an ace-machine and had the unique ability to dish out a second serve which was more powerful and more accurate than the first. He was also a three-time finalist at Wimbledon. But at the start of 2001, he contemplated retirement after struggling with a shoulder injury. Going into the Championship he was ranked in the 120s which couldn’t even guarantee a direct entry. But what unfolded was a fairytale. His odds were 150/1. But he became the only                                       male entrant to win Wimbledon as a wild card.

2001: The early 2000s were the sunset years of Sampras’ career. So, when a 19-year-old Federer beat the seven-time champion in the fourth round in 2001, it signalled a change of guard. Federer was dubbed the next grass-court king and he lived up to it winning seven Wimbledons. But it also heralded a different kind of change. In that match there were 254 serve-and-volley points. When Federer beat Andy Roddick in the 2009 final over five sets, there were 11. In those intervening years, an art was lost, though for no fault of Federer.

2008: Winning the French Open and Wimbledon in the same year is perhaps the toughest of asks. The successful transition from the slow and bouncy clay in Paris to the fast and slippery grass in London, all in a matter of two weeks, is considered next to impossible. That Borg managed do it thrice in succession (1978, 79 and 80) is the reason why he is right up there in the pantheon of greats. That list had a new member in 2008 when Rafael Nadal defeated Federer to become the first man since Borg to achieve the feat. A dominant clay-courter had beaten a master of the grass court, ushering                                       in the era of the all-courters.

On grass, there is no greater weapon than the serve. It's boom-boom time for the big servers at SW19, as players like Boris Becker, Pete Sampras and Goran Ivanisevic have shown. Presenting some 'top guns' who are likely to cause a flutter or two even if they don't go the distance the way Becker, Sampras or Ivanisevic did...
But none of the "BIG FOUR" mentioned in this story has achived serving Aces. There are " missile men" who are unbeatable in their Aces:


enjoy... it is reloading the happiness..

You can visit to our back issues from here. This archives page is presented in the choronological order of the issue published. The miniature of the front page of the popular issues are displayed here. Click a a picture and you will be lead to the page concerned.